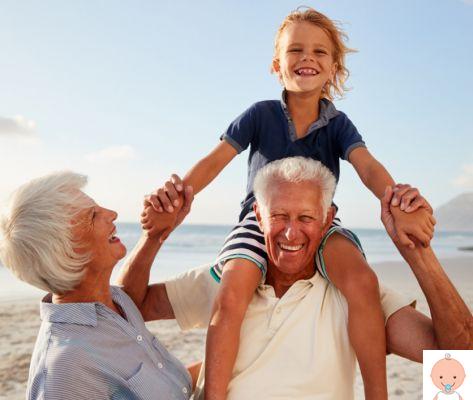 What to do if the child prefers paternal or maternal grandparents

Grandparents are considered a very important resource in the emotional development of the child. Sometimes, however, it can happen that the latter shows one marked preference for a couple of grandparents compared to the'other. We see what to do if the child prefers paternal or maternal grandparents.

Because my son prefers one grandfather over the other

The reasons behind this phenomenon can be many: for example, it is possible that the child develops a deeper attachment towards the couple (or the grandmother) who attends more home and who takes care of him.


This may simply depend on the fact that a couple of grandparents are more present than the other because by living in a neighboring area they can more easily reach their grandchildren and help their child in taking care of the little one. Or it may happen that a member of the couple is not in good health and is, for example, confined to bed. The child can then experience visits to his or her grandfather's house sick grandmother as a less fun time compared to the couple of grandparents who, on the other hand, are in good health and hence prefer the company of one couple over the other.

If the parents separated

Another cause that often compromises relationships with grandparents is judicial separation of the parents: in these cases it may happen that the custodial parent makes it difficult for the child to access the ex-spouse and consequently also to his family of origin. Fortunately in the field of Family Law the legislation on separation has recently been revised: Law 56/2006 amended article 155 of the Code of Civil Procedure, affirming the right of the minor in the event of separation to "maintain a balanced and continuous relationship" not only with both parents, but also "to maintain significant with the ancestors and with the relatives of each parental branch ".

It is therefore also a right of grandparents to be able to participate in the life of their grandson.

If the child wants to be alone with the grandparents

In cases where access to both pairs of grandparents, maternal and paternal, the presence of a strong preference for one of them can be partially corrected by offering the child the opportunity to spend more time with the couple in question. Particularly some children prefer to spend the alone time with their grandparents, while for example the parent is in the workplace, rather than visiting the grandparents in the company of their parents, as happens for example during the classic Sunday lunch.

This is because while adults talk to each other they dedicate minors to the child attentions than they would do if they were exclusively with him. The child could therefore get bored or feel excluded from the speeches of adults, even be jealous of parents or grandparents, and show reluctance whenever it comes to visiting the couple with whom this condition occurs most frequently. That is, the reluctance would not be directed at the grandparent couple, but at the situation that arises when you visit that grandparent couple.

However, it is always advisable if you notice strong preferences ask the child directly for the reasons who support this behavior. It is also not said that over time things must remain unchanged: in the different stages of growth, the child may discover that he feels more understood in his difficulties and in his choices by that grandfather or grandmother whom he felt less close as a child.

What to do if the mother hinders the father-son relationship ❯