What to do if we want children and he doesn't? 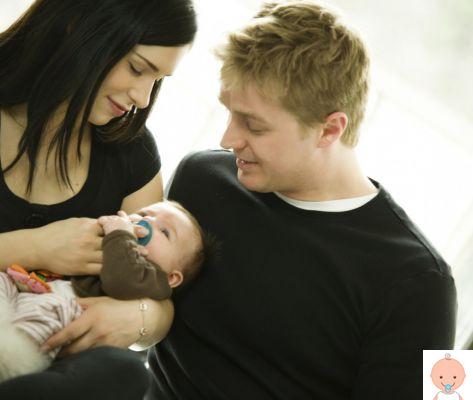 When we want a child and he does not, it is a rather heavy disagreement that can send the couple into crisis, because it is a real choice of life. How to get pregnant if he doesn't want to? Here are some things you can do to figure out which direction to take.

Invite him to reflect deeply

Beyond jokes and skirmishes, is that really how it feels? Because when it comes to deciding to have children, no one is ever "ready": without a pinch of unconsciousness, no one would ever give birth to a new life. Having said that, given that the biological clock goes on, it is a definitive decision and before making it one must carefully reflect on one's motivations. Are they only temporary or permanent?

When you are pregnant, you have only beautiful and exciting thoughts. Here are a dozen things to say to future dads about "after childbirth"

Don't press it too hard

Inviting him to reflect on the fact that this is an extremely important decision and one that cannot be postponed indefinitely does not mean continuing to press him and stay on him, behavior that could prove to be counterproductive. It is an adult, as well as our life partner. Trying to understand his motives is a better idea than focusing on threats, recriminations or worse still taking him for exhaustion.

What are the goals of the relationship?

Since does not want to have children, what are your plans for the couple? It is a legitimate question given that when we are together we should have common goals, and given that I will see a figlio (at the moment or forever) it is not, it should be understood if there are others that can allow the relationship to stand the test of time.

We do not try at all costs to convince him to come over to our side: we have no right to impose such an important choice on another human being.
Conversely, let's try to understand if his reluctance is linked to external and fleeting circumstances. Maybe he's having a hard time financially. She had a son with a former partner and the memory of the "failure" is still too vivid. It is better not to talk about the subject every day, indeed, after having addressed the subject it is good to avoid going back to it for some time. At the very least, he will appreciate our patience and understanding, and will have a chance to think about it.

Read also: I don't want children and don't judge me

If we see him a little more calm and open, after some time we try to talk about it calmly and reassure him about what we believe to be his biggest doubts: the financial side, the fact that our relationship will not change, etc. Let's list what we think are the greatest joys of parenthood and hear what you think.

Be honest with ourselves

We invited him to think about it, let's do it too. Having a child is it a fundamental life project for us? Can't we imagine our future without children? If so, it must be clearly stated. No matter how much we love our partner, we cannot marry or otherwise bond for life to a man who doesn't want what we want.
The breakup, especially after a relationship of years, is frightening, but it is better to face it now so as not to find, in ten or twenty years, regretting having thrown away our biggest dream.

What never to say to a pregnant woman ❯

add a comment of What to do if we want children and he doesn't?