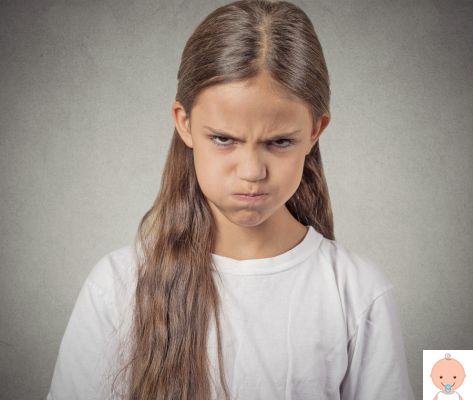 Relationships always have something particular, sometimes difficult, others easier to tolerate and live. Also the relationship between parents and children it is surrounded by a thousand facets and it happens that someone experiences the jaundice of their children in a rather tiring way.


Children or prepubertal can therefore also be violent despite the common mentality of considering children as subjects to be protected and protected. This does not mean responding in the same way but trying to understand the real reason for their being. Many times violence, anger, screams and offenses make one take into serious consideration the possibility that the bond lacks affectivity. But this is not the case. Indeed, such a situation hides a lot of need for attention and love, only that it is manifested in the most wrong way.

Read also: How to show affection to our children

Although, in the end, it is the only known form. When in a family the behavioral model is violent e aggressive, it is easy for children and young people to re-propose it in any context. If, on the other hand, between parents and siblings there is a climate of respect and good-naturedness, the child's demeanor seems out of place and here one wonders how this is possible. Frustration underlies this conduct. This means that giving the boy the opportunity to satisfy all his needs implies no longer being able to tolerate situations of continuous satisfaction. Paradoxically, being able to "get out of line" allows him to "vent" his anger towards rules, seriousness and education. That is, being treated as a "prince", and therefore living a privileged role at home, then allows him to transgress and become bossy, especially with the parent to whom he is most attached and with whom he spends more time. Usually with mum.


A mother alone and dedicated to her education, given that her husband is at work or absent on a relational level, and who satisfies all the requests of her child, being pressed by them, she finds herself having to manage another problem, namely oppression of one's own child. And here the latter becomes disrespectful, aggressive and violent. The forms of maltreatment they can be both verbal and physical and the higher the level of frustration, the greater the anger he will vent. The amiable and polite son is transformed at a certain point into a tyrant who offends, manipulates and remains at the mercy of himself since no one is able to contain him.

A child "used" as a trait d'union in a conflicting couple acts a bit as a "glue" by experiencing this condition as artificial, or a boy who is terribly complacent towards his parents because in doubt about their affection, he will express the accumulated anger after years . Or, again, invested with a role that does not belong to him.

What to do in the face of violent and disrespectful children?

It is not easy to manage situations of this type as one remains disconcerted in the face of previously unexceptionable conduct. It is therefore right, first of all, to try to communicate your own emotional malaise with respect to his behavior and not "to his person": "your attitude, what makes me suffer, makes me feel bad" trying to dissect the underlying emotion together.

When does the maternal instinct arise? ❯

add a comment of When children take over: violent and disrespectful of their parents