When does the maternal instinct arise? 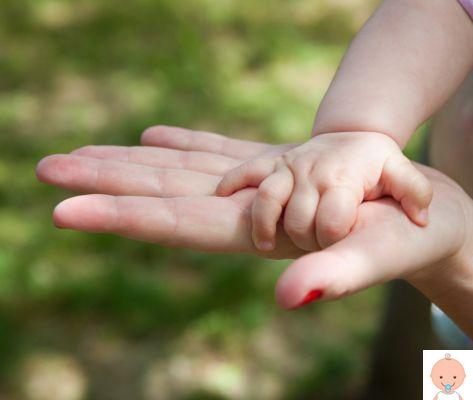 The mothers of our forum talk about it, they talk about it in the pediatrician's surgery and even at the market pointing to the poor wretch who, according to the gossipers on duty, is devoid of this infamous, blessed, sought after, maternal instinct. Sometimes it is also talked about on the news or in the newspapers almost as if it were a topic of gossip. Some have always felt it inside, some are fighting to wake it up as the child grows.

What is maternal instinct?

There is talk of one vocation, of a personal predisposition that either exists or does not exist, or is felt or not felt, no one can teach us to love or to be protective of our children. It is a bit like for a particular job, either we are inclined or we are not inclined and nothing can distract us unless the spark is triggered, the famous encounter of birth that ignites unconditional love and the maternal / paternal instinct towards the son himself.

Read also: The instinct to nest in pregnancy is innate

When does the maternal instinct awaken?

The maternal or paternal instinct is not learned at school, nor through courses ... with the maternal instinct we are born. But sometimes this awakens just when we meet our child for the first time and other times only after some time when we realize that that helpless creature is part of us.
We keep it hidden, often until we become parents, other times this jumps out of itself when you find yourself in front of any crying frugoletto of friends and relatives who, instead of giving us a sense of nervousness, softens us and makes us feel protective towards him.


If only we could, this instinct we would buy it by the kilos at the market, a bit like tomatoes or oranges, but alas, it seems that we are born with this famous instinct. A feeling that can come out when for the first time our gaze crosses that of the delicious and adorable little creature that we have kept inside our belly for nine months.

Suddenly, when we realize that inside the belly was OUR child, in seeing and knowing him, holding him for the first time in the most loving embrace we have ever been able to give, we feel a feeling of protection Infinity. We feel compensated and fulfilled, happy beyond words towards that innocent and defenseless little treasure.

And in that moment, when we realize that everything will revolve around him and that our goal will be to love him and protect him from the pains and pitfalls of life, right in that instant we find we have an instinct that we never thought we had, that we could become ferocious tigers if only someone tried to harm our child!


According to some scholars and researchers who carry out investigations on the subject, the maternal and paternal instinct is written in the DNA, according to others, some people who do not have it, should walk a path to discover the causes that have made this instinct drowsy and make them come to light before thinking of a child.

Often in fact i reasons that block a man or woman from having "good and protective feelings" towards a child, whether it is a stranger or a child, they are a painful past perhaps made up of traumatic events that drag on into adulthood as well. These emotional and psychological blocks can lead to destructive behavior towards other children, just as happens with the poor victims who storm the headlines of our newspapers almost daily, creatures abandoned, tortured, tortured, raped, protagonists of real tragedies often consumed in the family by the hand of mum or dad.

Some psychologists are in favor of the fact that in order for this instinct to awaken even in boys, they must participate and assist in the birth of their partner. In fact, science would argue that precisely during childbirth, thanks to a powerful release of prolactin, the maternal instinct is unleashed. And the paternal instinct can awaken in the man too, if he participates and "lives" the birth with his woman, if he perceives the pain, the suffering, but also the joy for the birth of his own child.

And it doesn't matter if the birth takes place under anesthesia, with a caesarean or in a natural way; as soon as you hear your child for the first time, instinct will come by itself. Neither does the experience one has or does not have with children; the maternal instinct it is not in fact knowing how to behave and the ability to know how to look after it, but rather the desire to protect it and to worry primarily about his own welfare.

At other times, sadly, there is real rejection of your baby during childbirth or after birth.

However, let us not be disheartened if after the birth, despite everything, we feel strangers to that child, and instead of feeling in love from the first moment we feel him as a little intruder; a woman is not born a mother and this relationship must be built calmly and tenaciously without giving up.

When is parental responsibility lost? The lawyer answers ❯

add a comment of When does the maternal instinct arise?