When you hear the fetus beat 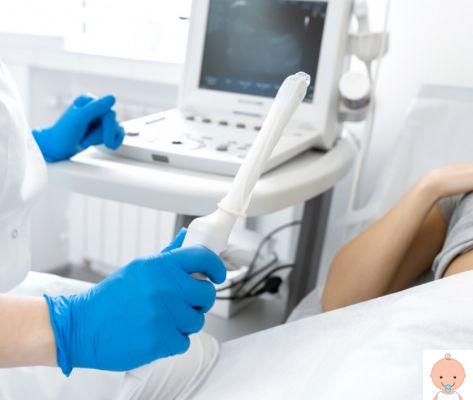 When you hear the fetus beat

When it turns out to being pregnant, one of the first fears is that the pregnancy does not develop in the right way. The first confirmation, after the delay, comes from the home test. Then there is the blood draw which analyzes the amount of Beta hCG in the body. Finally, the visit from gynecologist. And a question that many future parents ask themselves is: when you hear the fetus beat?

How the fetus develops in the first few weeks

Just as one sperm meets a ovocite and fertilizes it, the latter begins its ascent through the fallopian tubes towards the uterus, to go to implant itself by settling on the walls of the endometrium. This is where the embryo begins to grow and, thanks to the production of hormones, pregnancy is discovered through tests, either at home or in the laboratory. At the end of the first month of amenorrhea, therefore, when it is only a couple of weeks old, the embryo is about 5mm and his heart already beats, it's just too small to be seen on ultrasound.

Read also: Ultrasound of the XNUMXth week of pregnancy: this is what happens in the belly

The first ultrasound in pregnancy

It is only through the first ultrasound that the fetal beat, But it's not always like this. This is because it depends, as we said, from the moment in which this echography is done. The National Health System provides three ultrasound scans during the gestation, in the absence of problems, and the first should be done towards the end of the first quarter. But usually many couples choose to do the first ultrasound much earlier, privately, to be able to ascertain that all is well.

What is this "early" ultrasound for? More than a feel the beat, do an ultrasound in the fifth or sixth week - of course transvaginale - allows you to check if the embryo is implanted correctly and avoid, for example, the presence of an ectopic pregnancy, that is nesting of the fertilized egg in another place other than the uterus (fallopian tubes, ovaries ...). This type of pregnancy is very dangerous, if discovered late, because it can compromise the genital system with removal of the interested party.

Read also: Stories: three positive tests but it was a light egg

At the first ultrasound there is no heartbeat

La pregnancy, technically, it starts when yes conceives. But only very few women - those who accurately monitor their periods - can know exactly what day the fertilization. It then begins to count from the last menstruation and, only at first ultrasound, it can be determined by the size of the embryo whether the calculations are correct.

For this, you don't have to worry if you do an ultrasound and there is no heartbeat: it might be too soon. Even if there is amenorrhea by six weeks, for example, conception may have occurred later.

When to do the first ultrasound to feel the pulse

So if you want to be sure you can feel the beat and not to get unnecessary scares, resist the temptation to fix an ultrasound the day after positive test. The heart of the fetus, in fact, is audible through ultrasound only starting from the sixth / seventh week of amenorrhea, sometimes even later in the case of ridatazione ultrasound.

If you want to be sure you can hear the fetal beat but you still want to make sure everything is fine from the start, you can book a private ultrasound already in the fifth week and patiently wait for the one provided by the NHS in third month, where you will surely hear the beat little heart.

Read also: What do the ultrasound acronyms mean

What to do if there is no heartbeat

If by chance on ultrasound in the first few weeks the heartbeat could not be heard, only the gynecologist can tell you if it is too early or if it is a miscarriage. In the latter case, in fact, it is not certain that there are symptoms and only the ultrasound could give confirmation. Many times, especially if the pregnancy is really at the beginning, the doctor proposes another check a few days later: if the beat still not there and the dimensions of the embryo have not increased, then the definitive confirmation arrives.

Il beating of the fetus it can be felt starting from the sixth or seventh week, provided that the conception occurred about two weeks after menstruation. Sometimes it may not be audible via early ultrasound, but it is not certain that everything is not going well: it will eventually be the gynecologist a restore pregnancy and to offer you another visit.

How many weeks does pregnancy last? ❯

add a comment of When you hear the fetus beat