Whooping cough: what it is, how it occurs and how long it lasts 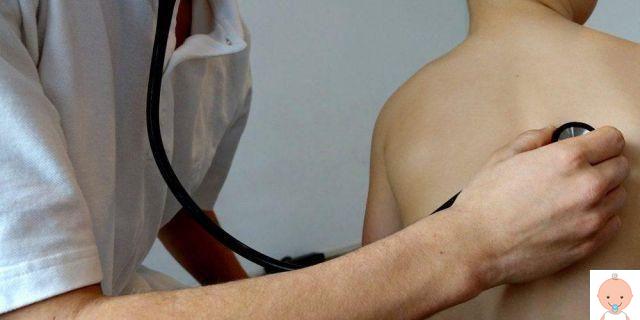 Many of us mothers probably remember well when they got whooping cough as a child. Coughing fits that seem to never end, "wonderful" nights without closing an eye and that strange hiss between one stroke and another. In short, there was little to enjoy. Although vaccination is mandatory, whooping cough still exists and not only among children. In fact, adults can also contract it, although it is often mistaken for bronchitis or a very powerful cold. Infants, on the other hand, are those who risk the worst complications and therefore are the ones who need to be protected the most. Let's try to understand what we are talking about.

What is whooping cough

It is an infectious disease caused by a bacterium called Bordetella pertussis. Another pathogen, which is part of the same family - Bordetella parapertussis - is responsible for parapertussis, a similar disease but characterized by milder symptoms. Whooping cough causes respiratory tract infections of varying degrees.

It is very contagious and, as we have written, it can strike at any age, even if it is considered one of the typical diseases of childhood. In fact, the greatest prevalence is below 5 years. The infection occurs by air through the droplets of saliva emitted by the sick person. Which, if not treated immediately with antibiotics, can transmit the infection even for 3-4 weeks. Exacerbations are more frequent in winter and spring, particularly in urban centers.

Obviously, coughing is the main symptom of this disease. It is very persistent, the attacks last a long time, sometimes resulting in vomiting. Often there is also a characteristic noise, called "inspiratory scream". It sounds like a dog barking: that's why it is also called "canine cough". Other symptoms may include cyanosis (bluish color of the face), apnea, conjunctival hemorrhages (ie in the eye), from the nose or, in more serious cases, sub-dural (ie in the “sheets” that line the brain).

The incubation takes about 7-10 days. After which 3 stages of the disease are distinguished:

The catarrhal stage is the initial stage of whooping cough, that is, when the symptoms appear. The cough is mild, there may be some fever line and copious nasal discharge. It therefore looks like a common cold that does not arouse particular suspicion. However, the child is already contagious. This phase lasts 1-2 weeks.

In the paroxysmal stage, the child has daytime and nighttime coughing fits. They are more and more close and violent, they do not make him catch his breath and, often, they also make him throw up. The crises are triggered by different stimuli, primarily food, especially in infants. If left untreated, the paroxysmal stage can persist for up to 2 months.

The third phase is that of convalescence in which the symptoms are progressively reduced, even if the cough - albeit diminished - can remain for a long time.

Whooping cough can degenerate into more or less serious complications. The most serious are bacterial superinfections that can cause ear infections, pneumonia, bronchitis or neurological affections (for example seizures or encephalitis).

Whooping cough can be dangerous in very young infants and children under one year of age. It causes 2 deaths for every 1.000 cases and almost always involves children under the age of one year. The risk is much higher in babies less than 6 months old. Therefore, protection with the vaccine is essential.

How is whooping cough diagnosed

Pertussis is confirmed by isolating the bacterium responsible for the disease. This is done by analyzing the secretions of the nose and throat with a nasopharyngeal swab.

Being caused by a bacterium, the cure is with antibiotics. The earlier they are administered, the faster the baby will heal. Furthermore, after 5 days from the start of therapy, the chances of contagion are drastically reduced. Keep in mind that a child with whooping cough is able to infect 90% of the children he comes into contact with. This is to underline the fact that it is an extremely contagious pathology.


Antibiotics should already be prescribed during the catarrhal phase: however, it depends on the precocity of the diagnosis. These drugs act on the triggering cause of whooping cough, but are not very effective for symptoms. Cough suppressants may therefore be recommended, but they are not always indicated in very small children.

The prevention of whooping cough

The only weapon available to prevent whooping cough is the vaccine. It is among the mandatory ones and is included in the so-called hexavalent composed of 6 serums: anti diphtheria, anti tetanus, anti pertussis, anti Haemophilus influenzae, anti hepatitis B and anti poliomyelitis (we talked about it HERE).

The first dose of this vaccine is given after the first 2 months of life are completed. It is the first that is done to newborns. In the first year of life, the doses are 3, while a booster is expected around 5-6 years.

To protect the little ones as much as possible before they get the vaccine, pregnant women are offered to get vaccinated against pertussis themselves. The antibodies cross the placenta and therefore the baby is born already immunized against this disease. The vaccine against pertussis in pregnancy is proposed between the 27th and 36th week of gestation.

Whooping cough: because it is dangerous for the baby ❯

add a comment of Whooping cough: what it is, how it occurs and how long it lasts