Why don't mother-in-law and daughter-in-law get along? Problems and possible solutions 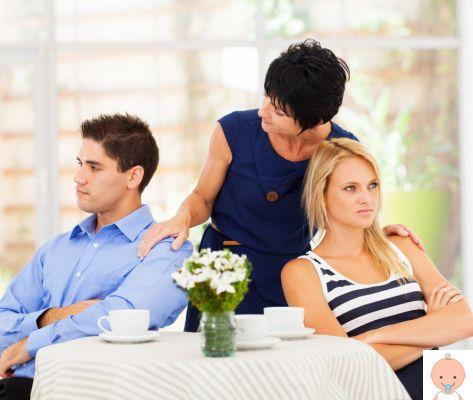 Why don't mother-in-law and daughter-in-law get along?

That daughter-in-law and mother-in-law are like dogs and cats is certainly not a big news; if once the idea of ​​the "mother-in-law monster" was typically associated with her mother, today the situation has been reversed, so much so that the famous film with Jennifer Lopez sees the "mother-in-law" Jane Fonda in the role of the antagonist.


Thankfully, people almost never respond to prepackaged stereotypes, and therefore the world is full of daughter-in-law relationships characterized by mutual respect, affection and in many cases also by a fruitful collaboration in the management of children-grandchildren. And at the root of the problems, when present, there are many factors that vary from situation to situation. Let's see which are the most common.

Also read: 10 phrases a mother-in-law should never say to a daughter-in-law

Sometimes the problems between daughter-in-law and mother-in-law begin with engagement and marriage, and usually the situation escalates when children are born. In short, it is difficult for a kind and correct mother-in-law to suddenly turn into a witch: usually the signs are there from the beginning and have to do with the well known inability to terminate the umbilical cord with the child that we have "stolen". What then the aforementioned son is more or less consenting e grandmother, it's a separate chapter :-)

There are mothers-in-law who show themselves hostile towards the daughter-in-law from the first moment, hinting in no uncertain terms that they consider her an enemy, a rival in the heart of their son, but not only. Today we also have mothers-in-law jealous of the beauty and youth of her daughter-in-law, or of her intelligence or of her success in her work. In this case they are very competitive people, who have not calmly accepted the passing of the years and / or they have a somewhat morbid and not very clear relationship with their son. Suddenly they realize that their "child", which until yesterday they changed the sheets and - in the most serious cases - they served as housekeepers at 360 degrees, has grown up, and is about to start a marriage or a cohabitation. They feel they have lost control over him and identify the one who is "taking him away" as a scapegoat.

Daughter-in-law jealous of her mother-in-law

It must be said that the faults are not always, or almost never, all on one side. If there is the daughter-in-law who as a reaction to the intrusiveness of the mother-in-law closes up like a hedgehog and raises a wall on any possibility of civil relationship, there is also the one who proves to be jealous of the mother-in-law a priori. His insecurities feed on the true or presumed "adoration" that his partner has towards his mother: the unfortunate must be careful not to express any kind of quality, starting from the kitchen up to the character skills, in order not to trigger an uproar . As always, we need to be honest with ourselves and ask ourselves if our bad mood comes from objective gestures made by the mother-in-law to our detriment, or only from a prejudice we have towards her. If it is only about character differences, or determined by the difference in age, it is the case to let it go, also because in the future the situation will only become more difficult and a balanced and mature attitude is the only thing that can really help.

Relationship between mother-in-law and daughter-in-law with grandchildren

In fact, even in the case of relationships that manage to maintain themselves in a stage of cold cordiality, what causes open conflict to explode is the birth of the first grandson. If you thought your mother-in-law was intrusive, or had a control freak, you will understand that you haven't seen anything so far. It is as if the new grandmother transferred to her grandchild the same mania of possession that she has / had with her son, but multiplied by a thousand. She finally she has a "valid reason" for invade your life without restraint, since she is the grandmother and therefore "has the right". The improvisations will begin as nothing, the whining because she always sees too little, small-big intrusions that you will bear less and less; she will start poking into decisions that should only be made by the parents (but not in her opinion) such as to send him or not to daycare, and even how to breastfeed him or which pediatrician to choose.

The will also begin criticism of your way of being mothers, according to her, inexperienced when not completely inept; and unfortunately the repercussions on your relationship will also begin, in a special - but also delicate - moment such as the puerperium. If you have recognized yourself in this tragic picture, how can you intervene?

How to get rid of the pushy mother-in-law

As we said, no one suddenly turns into an intrusive, false and passive-aggressive person ("your wife NEVER lets me see it"). Probably a little voice in your head is already telling you when you are pregnant that your situation could be very similar to the one we have described, so what to do? Instead of panicking, it is good to organize yourself so that you don't need her in the first place. It's bad to say, but if you plan to entrust the baby to her for part of the day, you will have no way, with such a person, to assert your rights as a mother. She will in all likelihood try to replace you and she will use your need to direct your lives. That of grandmother-babysitter it is a convenient solution, but it is possible only if there is at least a relationship of mutual respect at the base. If, on the other hand, you involve her in the life of your grandchild but never give her the impression of depending on her in any way, it will be much easier for you to give rules, and there will be a great need for them. So yes, you can unplug the telephone and intercom when the child is asleep, politely (but firmly) impose compliance with the rules you consider fundamental in terms of safety, health and so on, clarify once and for all that important decisions are up to only you parents.

A famous aphorism taken from the Satires of Juvenal says "As long as the mother-in-law is alive, domestic peace is out of the question. " It's really like this? We believe that, except in rare cases in which serious episodes have occurred, it is possible to find a modus vivendi, first of all by making an examination of conscience: is there really nothing we can do to live peacefully with the mother-in-law? Are you sure? May it be be more flexible or viceversa put more stakes without fear of scratching your image of "angel of the hearth."", always keep in mind that the change must come from you. Do not let yourself be carried away by the childish game of spite, digs and small-big revenge, but honestly seek the best for your family. The situation will only improve. To quote another proverb "The mother-in-law made her out of sugar, yet the daughter-in-law said 'how bitter it is'": well, thinking that yours would be bitter even covered with Nutella won't help you :-)

White losses in pregnancy, the guide to interpret them ❯

add a comment of Why don't mother-in-law and daughter-in-law get along? Problems and possible solutions