Why some grandparents can't be with their grandchildren 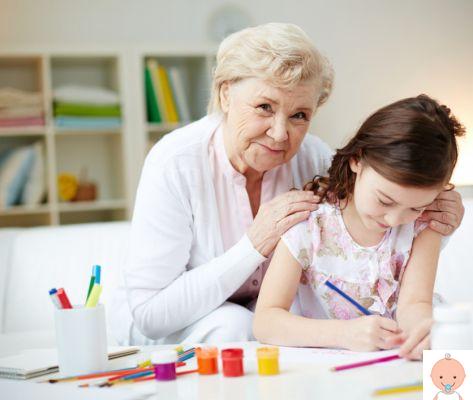 Grandparents who cannot be with their grandchildren

My mother always asks for the company of my children. She says she never sees them and that she has grandchildren she doesn't know as well as she would like. He always buys toys for them and cooks them every time for an army, but when I bring them to him to leave them for lunch or for an entire afternoon if I have to work, he begins to complain and make it clear that it would be better for them to go away. It is not explicit but it becomes unbearable with his moans ... I don't know how to behave ...

The role of grandparents

Grandparents are gods important figures in children's lives. They represent different points of reference from the parents but are equally significant: their protective role does not involve only the grandchildren but also the adults.


Their parenting experience allowed them to develop wisdom, which if well disposed, allows to make an excellent contribution to the growth of the little ones. Grandparents play with their grandchildren and give things that a parent sometimes forbids, but they don't spoil them for that.

Il role of grandparents it has much more complex characteristics because, as parents of the parents, it has an emotional function that is not limited to simple company but goes far beyond.

Their presence conveys the sense of Generational and family "belonging": through them emotional and cultural values ​​are handed down. Belonging, understood as the historical memory of a family-group, outlines and shapes the individual identity.

Their protection, another rivalent component of the relationship, allows children to develop self-confidence and they learn, in turn, to take care of their grandparents and their parents, paying particular attention to their gestures and their reactions. When, for example, children come into conflict with their parents - by whom they do not feel understood - they tend to turn to those who are their accomplice or defend them, the grandparents, especially if they have a daily and direct relationship with them.

La patience which is sometimes missing in the parent-child relationship it is natural instead in grandparents who devote the time and understanding that parents often lack. The latter, taken by the frenetic pace of life and work stress, do not give their children much space to play and playful moments are scarce. The relationship between grandparents and grandchildren is made of dedication and complicity: an experience that recalls freedom, games, time, dedication, relaxation, stories and long walks.

Grandparents who are parents

However, it must always be respect the roles as everyone has their own. It may happen that older people intervene in the education of children by imposing their point of view on actual parents. In this sense, a generational contrast can be created that goes far beyond the relationship between grandparents and grandchildren but which instead concerns first and second generation parents and children.

This is how the quarrels they involve everyone, sometimes the visit is denied or even the attendance is interrupted, to the detriment of the younger ones who, on the other hand, are deprived of the affection and attention of those who would like to play, laugh and joke with them. Indeed, often turbulent discussions involving adults or couples who do separate they leave a generational void that cannot be filled by anyone. The power struggle or estrangement from closest relatives or friends involves sacrifices in terms of relationships. The "favorite" grandparents become those of the family of origin of one of the parents, while the others are left out.

Why grandparents can no longer be with their grandchildren

these closing attitudes towards a specific family nucleus - or conflict between parents and first and second generation children - it assumes aspects of ambivalence between one and the other and consequently also involve the grandchildren.

When a parent, for example, does not accept the separation and rupture of the marriage of the child, even the relationship with the grandchildren changes: relationships tend to change without almost anyone noticing or, in any case, is forced to give them up.

Nowadays, theage of couples who decide to have children is over the age of 35 and the grandparents, therefore, are a lot more elderly compared to them. It is therefore permissible that at times they no longer have the strength or the patience to share long or particularly demanding times with them precisely because they are caught up in their problems or health conditions that make it difficult for them to look after their grandchildren.

Relationships exist but needs change and, despite seeking the company of their grandchildren, they are not very "patient" and this can be interpreted as poor "endurance": the rare attention and the short time, boredom and grumpiness put the relationship in difficulty.

I factors that take over can be many, including one limited complicity between grandparents and children as well as character aspects and insignificant relationships between the members of the individual generations.

How is it possible to intervene? Il constructive dialogue is a good deterrent to conflicting relationships but often difficult to deal with as it involves questioning the now well-structured relationships, aspects of everyone's personality, one's education and subjective vision of the circumstance. You continue to be children even if you are a parent and often you can't be objective.

Safeguard the relationship and let there be the presence of the elders in the life of your child should have centrality: expressing one's disappointment and communicating on an emotional level what this entails, both as a child and as a parent, could favor a constructive dialogue.

The choice to face the temporal difficulty, noting a maximum tolerance time, could favor attendance by supporting the relationship from a qualitative rather than a quantitative point of view.

Why it is important to take calcium during pregnancy ❯