Will the postpartum tummy go back to the way it was before? 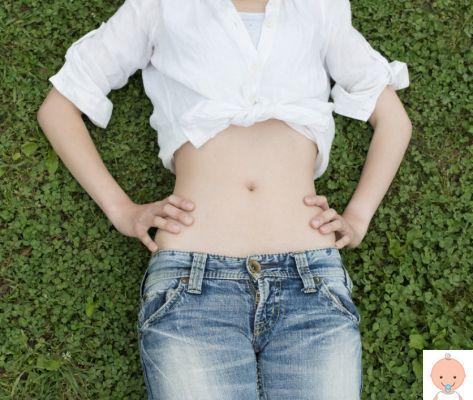 Will the tummy go back to the way it was after giving birth? It is certainly one of the most frequently asked questions among new mothers in the first days after childbirth. Many are surprised and a little envious to see that some new mothers have regained the shape of the past after a few weeks, while they have the impression of still being in the sixth month of pregnancy. What does this difference depend on?

Soft belly after childbirth, what to do

First of all, let's start by emphasizing what the body needs time to return to the forms prior to pregnancy. During this time the belly swelled like a "ball"to accommodate a fetus that has developed in 9 months of gestation. But after giving birth the belly takes a while to deflate, moreover it becomes softer, flaccid, numb, almost" foreign "to your body. But don't worry, it's Everything is normal! After being stretched to the maximum, the belly suddenly empties and the tissues must come back into place, as well as the muscle structure that supported it.

10 tips for losing weight after childbirth

Are there any extra pounds left after giving birth? Here's how to eliminate them in a healthy way

It can be useful:

After giving birth the hormones start moving and the belly begins to shrink. It takes at least 4 weeks for your uterus to regain its initial shape. As Rossana Sarli, gynecologist at the University of Genoa explains, if in the last weeks of pregnancy she weighed almost a kilo, already after seven days from birth, the uterine tissue is reduced by 50%, to then return in six weeks to the same size as the period before pregnancy and to a weight of about 100 grams. Plus those who are called "uterine bites", especially after the second birth, they are fundamental: they are contractions of the uterus that occur in the first days and which serve to bring the uterus back to its original shape.

All the cells in your body, increase in volume, they release fluids in the form of urine, vaginal secretions and perspiration. For what concern grasso accumulated to feed the baby, it will start to be burned, especially if you are breastfeeding and if you have time to play some sport. But even in these cases it will be necessary to wait a few weeks to see the results. And if after giving birth you will notice a dark line on the baby bump do not worry, it is a normal reaction due to skin pigmentation that appears when the muscles of the abdomen relax and separate slightly to allow the fetus to grow. This line disappears after a few weeks after giving birth.

Read also: How much and how does the belly grow in pregnancy

We are tempted to believe that after a caesarean it will take much longer to get back into shape as before because i abdominal muscles were damaged by the surgery. Actually the danno it is less than one might think: the important thing is not to be in a hurry and wait a few months to ensure proper tissue healing. After a few weeks you can start with some exercise on the abs. The ideal is to enroll in the pool and swim or take a course of water aerobics: activities that lighten the perception of weight, make us feel lighter and loosen the joints while exercising in a targeted way.

The pancera is one sheath which tightens at the height of the band of the abdominal muscles and the lower abdomen and is recommended for all women who have given birth with a caesarean and also to those who have had a natural birth. In case of caesarean The belly is undoubtedly used to feel less pain and to move better in the first days after childbirth and, in general, it is useful for restoring the muscle-tendon-ligamentosis of the belly area, but also to maintain correct posture and a very straight spine .

The uterus after caesarean section

In natural childbirth the contractions that occur in the last stage of labor and delivery, the one called afterbirth, serve to expel the placenta. In childbirth caesarean, in the days following the caesarean section, it is prescribed to women ofoxytocin synthetic, the hormone that causes contractions and which serves, therefore, to make the uterus contract in such a way as to expel blood and residual materials as well as to slowly return the uterus to the size it had before pregnancy.

Tips to get your tummy back as before

But despite this information, surely your question will always be the same: "why did some women regain their physical shape only after a few weeks, and it took me months?"

This depends on several factors:

Probably it will be easier to lose weight if:

You can start doing some ab exercises later a month after delivery and especially walks, take regular walks every day with your child: thirty minutes of walking a day will help you lose weight and restart your metabolism.

In any case don't forget that in general it would have been at least 6 months, after giving birth, to regain your former weight.

The contraceptive pill is too expensive, but everyone wants it ❯

add a comment of Will the postpartum tummy go back to the way it was before?