Woman's body after childbirth: what changes? 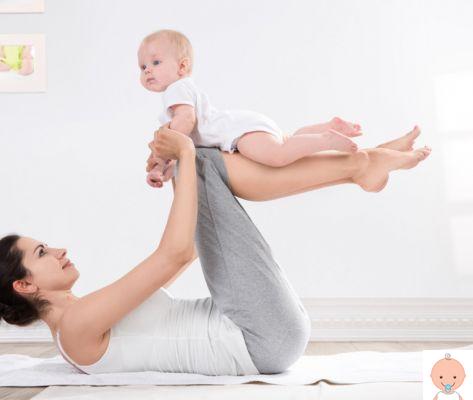 How the body changes after childbirth

Il baby was born and you look in the mirror and you don't see yourself the same as before. In fact your body, during the nine months of gestation, underwent one transformation truly epochal and has adapted to the great transformations that have been necessary to make the baby grow comfortable and healthy in your uterus. But how the body changes after childbirth and the body will be as before? Let's try to answer.

Woman's body after childbirth: what changes?

Feet, arms and much more. How does a woman's body change after giving birth?

Experts say it typically takes at least a year or 18 months after giving birth before your shapes return to the way they were before pregnancy.

The period of the postpartum changes it mainly concerns the first month, while from the second month the symptoms will begin to decrease.

Here is what can commonly happen:

What will the vagina look like after giving birth? After giving birth you have very abundant vaginal discharge. Apparently similar to menstruation, they are composed of fluids and blood that the uterus excretes after the baby is born. The losses last about six weeks and can change color and texture, becoming increasingly clear and eventually even yellowish.

In the case of a natural birth, it is normal to have vaginal irritation after the baby is born, especially if there has been a laceration or if an episiotomy has been performed. The swelling and irritation are due to the change in the entire vaginal area to allow the baby to come out. The situation improves in the weeks after giving birth.

An American study found that pregnancy can permanently change the foot: in particular some women may find their feet flattened (mainly due to the excessive weight gained during pregnancy and the laxity of the joints) or with wider feet.

In the first two months after giving birth, you may have small episodes of incontinence. They are due to the relaxation of the pelvic ligaments and muscles that strained during pregnancy. You can try to regain tone with contraction and relaxation exercises of the vaginal muscles.

The effort of natural childbirth leads many women to suffer from hemorrhoid problems. The intestinal slowdown that in many cases occurs after childbirth does not help in a quick resolution of the problem. During this period, it is advisable to take a lot of nutrition, eating fruit, vegetables, foods rich in fiber and drinking plenty of water.

With the arrival of milk shortly after birth and the start of breastfeeding, milk production is still not well regulated. At this stage it can happen to have breast engorgement. It is advisable to breastfeed the baby on demand and empty the excess milk. In case of fever or other symptoms, contact your doctor.

During the first few months after giving birth, you may notice more hair loss than normal. It is a transient state that the body recovers over time. Avoid taking or using substances for the hair that are not compatible with breastfeeding.

During the nine months the hips widened both due to the increasing pressure of the uterus and to make room for the baby, especially in preparation for delivery. But do the hips go back to the way they used to after pregnancy? It takes at least six weeks for the uterus to return to its original size. The bones of the pelvis will return to the way they were before pregnancy within a few months, however some fatty deposits can concentrate on the hips and belly and only a correct diet and regular physical activity can help us eliminate localized fat.

Read also: Re-education of the perineum after childbirth

Swelling in the legs

Some women may experience swelling immediately after giving birth, especially in the face and leg area. This is a situation that tends to disappear in the weeks following the birth. To relieve symptoms especially from swollen legs you can try to keep them raised in order to promote circulation, take foot baths with fresh water and salt or with essential oils and regularly practice a lymphatic drainage massage which starts from the ankles and goes up to the inner thigh.

During pregnancy the level of some specific hormones increases exponentially. It is above all the estrogen and progestogens. After giving birth, the level of these hormones suddenly drops back to pre-pregnancy values. And along with these also change other hormones, such as thyroid, cortisol, prolactin. A real hormonal storm that occurs in the first few days after giving birth and that can certainly affect mood. For this reason, new mothers can experience a certain irritability, melancholy, sadness and mood changes in the first days after giving birth: it is the so-called baby blues, a completely normal phenomenon that then passes spontaneously as soon as the hormonal balance is re-established and the new mother is accustomed to the new rhythms of life.

Finding yourself with water retention and the classic "orange peel skin" after childbirth is a common problem for many new mothers. In addition to fatty deposits and circulation problems, also plays an important role prolactin which increases water retention in the thighs, buttocks and hips. What to do? Of course, the advice we know well applies:

But a cycle of manual lymphatic drainage with essential oils such as lemon balm or cypress, which favor the emptying of the lymphatic vessels.

Six women they agreed to tell the British newspaper Daily Mail how their body changed after giving birth and they also bravely agreed to be photographed in undergarments, without shame or embarrassment, to testify that the female body, especially when it gave birth to a other human being, he is always beautiful.

Natalie, 26 years old, mom from eighteen months. Her mother suffers from stretch marks and so she expected it would happen to her too, but she certainly didn't expect to see stretch marks appear all over her belly on her up to her breasts and then also on her arms and breasts. The appearance of stretch marks began around the fourth month and then grew throughout the pregnancy, but the problems continued even after giving birth, when Natalie lost a lot of pounds too quickly and made the situation worse.

Jessica, 20 years old, mom from three months. At the beginning of her pregnancy she was definitely overweight and was wearing a size 50. Today she wears a 42. When she found out she was pregnant Jessica had just decided to go on a diet, when she learned she was expecting a baby she stopped the diet but decided anyway. to eat little and only healthy and possibly natural foods. A fixation? Perhaps, since during the nine months, instead of gaining weight, she lost weight considerably. Despite this, the doctors told her not to worry. After her birth, her breasts had gone into two sizes and her weight had dropped significantly.

Natalia, 37 years old, mom from 15 months. Before pregnancy she was thin and had a flat stomach and firm legs. Today her thighs and hips are full of cellulitis. A very dynamic woman, Natalia, used to go to the gym regularly before her pregnancy and her body was enviable. During pregnancy, even without putting on too much weight, she developed cellulite and even today, despite using expensive creams, the situation has not improved at all and she does not have the energy and time to go back to the gym as before.

Rachel, 30 years old, mother of three children, the last of whom is one year old. Three children in five years for Rachel and the last two pregnancies have been very difficult and resulted in a caesarean section. Her body bears the obvious marks of her parts. A scar still red and bruised today that hurts and bothers her and above all a soft and flaccid belly, wide hips and two more sizes.

Aoife, 27 years old, mom from 22 months. During her pregnancy she put on very few kilos of her so much that, hidden under her clothes, her belly was not seen until the sixth month. But after giving birth to her there flaccid and soft belly upset her and most of all she developed inflammation of the sciatic nerve that prevented her from moving and picking up her son. according to her doctor, she also suffered from postpartum depression. Today she is much better, she is back in her clothes before her and she looks beautiful.

add a comment of Woman's body after childbirth: what changes?