Yellow discharge in pregnancy: when to worry? 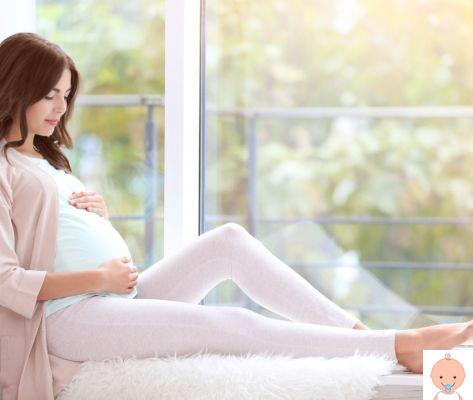 Many women live together at different times of the month with vaginal discharge and they are not always related to pregnancy. However, we know that most pregnant women will produce sticky, white or pale yellow mucus early in the first trimester and during pregnancy. Let's see what the yellow leaks and when it is a normal phenomenon and when to worry.

During pregnancy it is normal and quite common to have discharge which may be pink, white or yellow in color. If they are red in the first weeks of gestation they can be the so-called "plant losses ", therefore linked to the normal engraftment of the embryo on the uterine walls. But white losses that are caused by hormonal changes are also normal. However, a loss of more red or brown color accompanied by abdominal pain should be reported to the doctor.

Yellow losses in the first quarter

In the first weeks of pregnancy it is normal to have leucorrhea, i.e. vaginal discharge that is clear or milky white, has a not unpleasant odor and is caused by an increase in estrogen levels. Loss of yellowish color should always be kept under control because they can indicate an ongoing infection, especially if they are accompanied by burning, itching or bad smell.

Yellow losses in the second quarter

A loss of dark yellow color it could be a sign of an infection such as bacterial vaginosis, trichomoniasis, or mycosis, especially if the discharge is thick, smells bad, or is accompanied by itching or burning. But in the second trimester a loss of pale yellow color and a more watery consistency may be a loss of amniotic fluid.

Yellow losses in the third quarter

In the third quarter, losses must always be observed and monitored carefully. What can make us suspect that the loss is related to one loss of amniotic fluid? It is quite easy to understand: amniotic fluid is very thin and of a light or pale yellow hue, like urine. It is also usually odorless or slightly scented.

It should also be noted that, especially in the last months of pregnancy, the weight of the belly can favor the onset of a slight incontinence and therefore often yellow vaginal discharge can also be slight urine losses.

Yellow leaks when to worry

Even if the losses they are quite common in pregnancy, however, the doctor should be contacted in case of:

These symptoms may indicate the presence of an infection or a pregnancy complication.

Sore breasts, nausea, fatigue - early pregnancy symptoms are quite familiar to most women, but there are some that are less well known and vaginal discharge is one of them. Is it therefore normal to have losses in the first weeks of gestation? Certainly yes and they are mainly linked to the increase in hormone levels and blood circulation in the vagina.

About the 25-40% of pregnant women will notice spotting in early pregnancy. This slight bleeding can occur when the fertilized egg attaches itself to the uterine lining. These implantation losses are common after about two weeks after conception. This spotting can also be caused by cervical irritation, ectopic pregnancy, or the threat of miscarriage. So if the losses become more abundant and are accompanied by severe cramps, back pain and excruciating pain.

Le brown or reddish brown discharges they are usually caused by old blood being passed out of the body. It can be an early pregnancy symptom, so we can trace this type of leakage to implantation of the embryo in the uterine walls, and it is generally not a cause for concern. However, it is important to consult your doctor if red or brownish discharges occur.

During the period, the one that elapses between one menstruation and the next, it is normal for a woman to have losses of different types and consistencies. For example, during ovulation, therefore in the most fertile days of the month, the cervical mucus becomes more abundant, its filamentous consistency favors the travel of spermatozoa towards the fallopian tubes and makes the environment more welcoming after conception.

La leucorrhea typical of the first weeks of pregnancy, however, is essentially caused by the increase in the levels of estrogen hormones. The leaks are whitish in color and do not smell bad.

White discharge in early pregnancy essentially has the task of cleaning up but also defending the uterus and fetus from external aggressions. As pregnancy progresses, the losses may stop or decrease, or remain constant, in this case it is defined as leukorrhea gravidarum.

Leaks in Pregnancy: When Are They Worrying? ❯

add a comment of Yellow discharge in pregnancy: when to worry?