You shouldn't sleep on your back during pregnancy 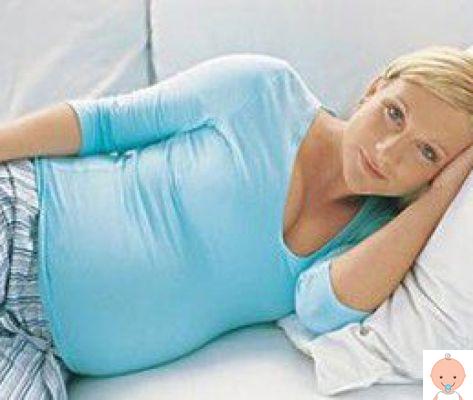 We often talk about the best location which must assume the mom during pregnancy. According to a recent study by a group of Australian researchers, it's best for expectant mothers avoid sleeping on your back. According to the researchers, in fact, there is a link between the infant mortality and sleeping position by pregnant women. And sleeping on the back could be harmful to the health of the unborn child.
Researchers argue that sleeping on your back could increase the risk of problems during childbirth and also the risk of the baby being born dead. Or the risk of having an abortion within the 24th week. The researchers analyzed the positions taken during sleep by 295 women pregnant in 5 years. And they came to this conclusion.
The reason? Sleeping on your back  reduces blood flow in a main vein which from the legs r adds the heart. And this slowing of blood flow would cause problems in the uterus. According to the researchers, therefore, the best sleeping position during pregnancy it is on the left side.

But the researchers want to reassure all mothers on the fact that the study is based only on the observation of the positions assumed by expectant mothers during sleep and there is still no scientific basis. So, moms, don't worry so much! And sleep as you prefer!

However, during the last months of pregnancy, for many mothers it is truly impossible to sleep on their backs, because the weight of the baby can be uncomfortable and almost suffocate. And then many mothers prefer to sleep either on their side or in a semi-sitting position. So, try to be quiet and to rest as much as possible!

Is it legitimate to leave minor children at home? Our lawyer answers ❯