Zygote: the first cell of a new life 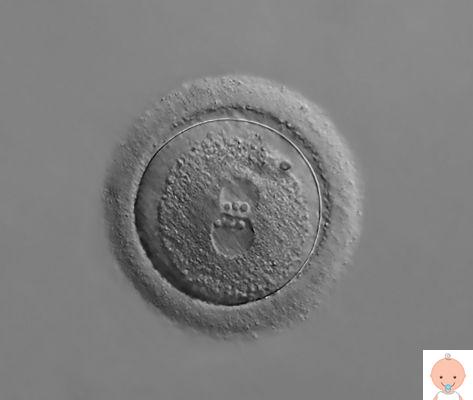 The zygote (top image) from the ancient Greek ζυγωτÏς (zugÅtos): united or yoked, represents the first cell of the new individual, is a totipotent cell, that is capable of giving life to several types of cells. Proceeding with the replication phases, it tends to lose this peculiarity until it specializes in the production of a single type of cell.

In most amphigonic organisms (sexual individuals destined to mate with those of the opposite sex) there are two types of gamete or reproductive cells: the male one, more mobile, and the female one, larger and less mobile.

The fusion of the two haploid gametes, which have only one chromosome of each type, thus generates a diploid cell containing all the genetic (hereditary) material of the new individual: half from one gamete and half from the other.

In humans, the zygote (i.e. the first phase of the development of the embryo) has a diameter of approximately 0,1 mm and it is thicker than other cells in the body. It travels one of the woman's fallopian tubes towards the uterus, dividing constantly but without increasing in size.

Twins can be mono ovular or bi ovular. The first are twins in the strict sense, ie generated by a single zygote, the second are two egg cells fertilized by two different spermatozoa. They are therefore "simple" brothers.
The presence of only one placenta does not guarantee monovularity, as neighboring placentas can fuse together. Mono-ovular twins have the same gene poolrejection is avoided in transplants between siblings of this type.

Read also: The first week of pregnancy, the symptoms

From the multiplication of the zygote (mitosis) we have the formation of blastomeres.

The totipotency remains unchanged up to the third blastomer. The birth of twins is due to the division into two blastomeres, before the fourth replication.

Biovular twinning is a genetic factor, caused by the fact that some women mature 2 eggs (instead of one) every month.
Embryonic development then proceeds in stages:

After about a week, the mass of cells (now called blastocisti) implants itself in the lining of the uterus and begins to divide and progressively grow in size (the so-called embryo).

Il Christianity considers the zygote of man the beginning of a human life in which the soul is present, and for this reason it must be guaranteed by particular protections and rights, the same as those of the adult person.
Nell 'Islam it is believed that the fetus receives the soul only after about 17 weeks, that is, during the fifth month of pregnancy

add a comment of Zygote: the first cell of a new life